skip to main | skip to sidebar

As you may well have gathered, since the overwhelming likelihood is that you've arrived here from Amy and James' blog, we've moved to Cambridge. We've found ourselves a lovely spot and are settling in well - great to see family and friends new and old.

Today was largely spent doing all the non-scary parts of fitting solar panels. James helped put on the biggest and second-most expensive sticker we've ever bought, and everything went very smoothly. Tomorrow, a grown up, with special tools and an understanding of the dark and sorcerous art of 12v electric, is coming to finish everything off. Thanks to the extraordinarily helpful Midsummer Energy for their advice and assistance so far.

Posted with Blogsy
Posted by Chris at 5:57 PM 2 comments:

We're on our way to Cambridge! Hoping to arrive late August. We're currently at the top of the Caen Hill flight in Devizes.

Posted with Blogsy
Posted by Chris at 6:32 PM 1 comment:

And then there were two... 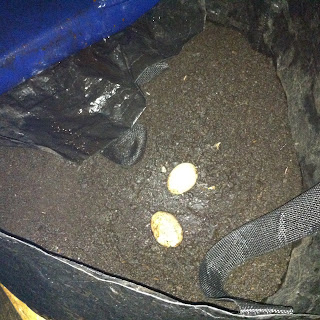 Last night, whilst checking that the automatic bilge was still doing its job during all this rain, we noticed that one of the seed potatoes we'd planted was uncovered. Thinking that maybe the rain had exposed it, we covered it back over and thought no more of it. This afternoon, there was a duck egg in it. That must explain the phantom potato uncoverer, then...

Question is, how do you gently persuade a duck that your front deck isn't the best place for their nest? We don't really want to have to stay put for a month or so whilst they hatch and then take a trail of confused ducklings with us everywhere we go like an aquatic pied piper... In what will hopefully be a warm up for a longer trip in the summer, we took the boat out for a few days up on the canal. The moorings at Pulteney Wier in bath have changed - rather than being managed by aqua terra at the sports centre, they're now being managed by a new firm who will be charging all year - £10 per night. You can now moor on both sides of the river; under the park as well as along the railings by the rugby ground. There's talk of putting facilities in - even pump out etc., but as with all things on the river, we won't hold our breath. Wow, blogsy, you really failed me there- not sure why all those photos have uploaded so badly.

Why was I not told about this wonder product before! Above - nasty watermarks on window frames. Below, after 10 minutes soaking in oxalic acid. Brilliant. New floor. Nightmare job. Let us never speak of this again.
Posted by Chris at 9:10 AM 1 comment: